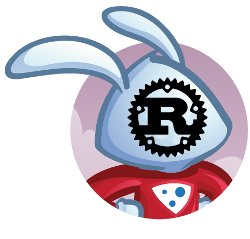 Rust is still very alien to me and I want to write a bit of code in it to get a feeling of the concepts and restrictions it enforces.

I worked through Rust examples but they always feel theoretical and artificial. To get dirty with something real I thought of playing with something concrete. Being a big fan of Varnish (a reverse proxy that sits in front of your web application and caches HTTP requests) - that sounds interesting to emulate in Rust? Disclaimer: I have never looked at the Varnish source code and I will probably make very obvious mistakes.

With that in mind I have set out the requirement for the first step:

I'm using Ubuntu as operating system and everything was very straight forward by following the installation instructions:

(the usual security warning: make sure to trust your sources before you execute random scripts from the internet.)

That single script installs all rust command line utilities you need into your home directory thereby not messing up your global Ubuntu system (yay!). It gives you the following:

We can use cargo to create a new project:

That creates a new folder "rustnish" (the project name) and the --bin option tells cargo to create a standalone application (instead of a library).

Cargo has created a "Hello World!" example in src/main.rs in our project. We can execute it like this:

Success! With cargo you don't have to think about compiler commands or anything - whenever you modify your source files just execute cargo run and it will detect file changes and compile everything for you. A big thank you to the Rust community at this point for providing such excellent tooling with the language itself!

It is crucial to have good language support for navigating around in source code. While working with Atom I really missed the functionality to click on functions or types to jump to their definition with Ctrl+Click. That works in Netbeans for example for Java and PHP and I would be really grateful if somebody could show me how to do that in Atom and Rust.

After a bit of research I found Hyper for Rust. That will give us a client and server library to deal with HTTP requests so that we don't need to parse HTTP requests ourselves.

Update 2017-07-16: A new version of Hyper has been released and setting up the server works a bit differently now. See the newer blog post about Converting a Hyper server to Tokio.

Edit Cargo.toml in your project and add a dependency line:

The next time you execute cargo run it will fetch the Hyper dependency for you, compile everything and then run your program. Super easy!

Let's walk through the Rust code in src/main.rs that can be found on Github.

Rust has a full namespace and module system and makes importing libraries straightforward:

That tells the compiler to use the Hyper library and import the "Server" type for example to make use of it in our program. "Server" is a complex type called a struct in Rust (comparable to a class in PHP/Java, but without inheritance and instead a trait system). I'm still confused by all the Rust terminology because an instance of a struct is not called on object. But there are also trait objects in Rust, so the term is in use and a different concept on its own. In general it feels like Rust is overloaded with concepts that you can learn about. Like in C++.

There must not be any expressions in the global scope in Rust, all logic has to live in functions. Coming from a scripting language this was the first thing I got wrong :-)

The main() function is the entry point for the program execution:

Rust uses the fn keyword to define a function. "fn" instead of "function" is an optimization to quicker write programs, but of course we know that we should optimize for humans reading programs faster instead. "fn" is not a natural word and harder to recognize for newcomers. (General programming rant: never abbreviate things because somebody will have to read and understand this.)

We start an HTTP server on localhost listening on port 9090. Our test program should only be reachable from our own computer, so localhost only seems appropriate.

The unwrap() call here tells the compiler to ignore errors that could happen when we try to bind our server to the interface/port. For example another service could occupy that port already. In that case the unwrap() call will raise a panic (comparable to a runtime exception) and our program will terminate.

Rust does not have an exception system like in PHP/Java. All functions need to return any outcome in their return type, that's why return types in Rust are often complex types that express multiple different result possibilities a function can have.

Next we tell the server instance which of our function will handle requests by passing in the function name "pipe_through". It receives an HTTP request instance and a mutable HTTP response instance that we will populate later.

If a function returns something in Rust you can't ignore it, so we need this superfluous unused variable here. Starting it with "_" tells the compiler to ignore it.

The Hyper server will now listen in the background for incoming requests while we write an output message in parallel that the server is running. println!() is a macro in Rust (yet another concept), but you can think of it as just a function call with variable arguments for now.

Let's look at the pipe_trough() function that will handle requests:

We us pattern matching with the match keyword here which works a bit like switch statements in other languages but seems to be more powerful. That way we can build variables from the different possible values of the incoming request and also terminate early if the HTTP Host header is missing for example (with our custom error_page() functions defined later).

Do you see all the to_string() weirdness here? Apparently statically defined strings in quotes are not of the String type and you need to tell Rust to allocate memory for them if you want to use them where String is expected. While writing this code I never knew when that must be done, so I just throw lots of to_string() calls in whenever the compiler complains about a type mismatch.

A simple task such as string concatenation is really complicated in Rust. Why is the protocol variable the only one without the reference operator? Why do I have to convert the hostname variable to a string first if it is a reference already? Same spiel as before: randomly throwing in to_string() and "&" operators until the compiler shuts up and we have our desired result in the url_string variable.

Using the Hyper HTTP client was pretty straightforward. The only thing that I don't understand is the clone() call here. I just want to forward the incoming request headers to the upstream request I'm building. They are of the same type, so why do I have to clone them? Maybe this has something to do with the Rust ownership model, but the compiler errors were not clear on that.

OK, I admit that in those last 3 lines I really have no idea anymore what I'm doing. I have to use the "*" operator because there is no other way to modify the response instance. Headers are weird again of course, so we do some cloning for good measure. The IO copying is moving over the HTTP response body which is represented by streams (which makes sense, you can have large data bodies). It feels wrong to use io from the standard library for this when there really should be a method response.use_this_output_stream_as_your_output_stream(&stream).

And yes, there are way too many unwrap() calls in my code, indicating that there is lots of error handling missing and this application will raise lots of panics when given invalid data.

Rust is one of the most powerful languages I have seen, giving you lots of tools to write safe code. I love the strictness of the compiler that reminds you of mistakes that you overlooked. The type and trait system is great, as well as the explicit handling of mutable vs. immutable variables. This style is definitely the future of programming.

That being said Rust is complex to use. I struggled a lot with going in circles between my code, the API documentation and other example code. At times I felt like working for the compiler and not for the sake of making progress in my program. It annoys me that I wrote code that I don't fully understand, but that is probably the case for every beginner in a new language :-)

A big thank you to the Hyper library authors for their powerful HTTP server and client API. While I had some minor complaints the exposed API surface felt exactly right to be productive fairly quickly.

#rust #rustnish
‹ Go easy on this code review, she is a woman after all Using Eclipse IDE for Rust on Ubuntu ›